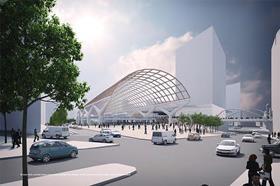 HS2 Ltd has outlined its procurement strategy for contractors on the £43bn rail project.

Speaking at a supply chain conference in Birmingham yesterday, commercial director Beth West said the railway developer will tender up to 20 major packages of work and two design and enabling works frameworks on the first phase of the scheme.

HS2 ltd is targeting a total cost of £17.16bn over nine and a half years for the first phase of the line, which runs from London to Birmingham.

Most of the construction packages are set to be procured through the Early Contractor Involvement model where a contractor and design team are appointed on a two stage contract, with a break point between the two stages, first to design the work and secondly to deliver it.

In her presentation, West said she didn’t want to see any “redesign or reworking” to increase efficiency on the project. She also said HS2 would be looking to use BIM and off-site construction throughout the project.

The biggest single package of work on the line between London and Birmingham, is the tunnelling works which total £2.9bn and will be split into four packages.

Another industry engagement day is scheduled for May 2014.

Meanwhile, MPs heard that the government’s calculation that HS2 would boost the economy by £15bn - published in a report by consultant KPMG - was “essentially made up”.

Former advisor on the project and professor of economic geography at LSE, Henry Overman made the claim to MPs on the Treasury select committee during a hearing yesterday.

But Richard Threlfall, head of building infrastructure and construction at KPMG - who also addressed the MPs - defended the report and said the figure was an estimate and the workings had been transparent.

Speaking after the session, Andrew Tyrie, chair of the committee, said: “KPMG acknowledged today that their £15 billion per annum forecast return for the project has no firm statistical foundation. A lot more work is clearly needed.”