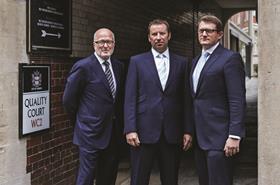 Ian Eggers, one of the co-founders of construction manager Rise, has exited the company four years after it was launched.

In a statement Rise said Eggers “is leaving with immediate effect” after “a basic divergence regarding the future direction of the business”.

Eggers is one of the highest profile builders in the construction industry. At former employer Mace, Eggers played a key role in securing the Shard under a construction management form of contract and at a fixed price.

Rise said Eggers would continue to have a “joint interest” in some projects “until completion or suitable exit opportunities”.

The directors of Rise would like to announce that Ian Eggers has decided to leave the company, after nearly four exciting years developing the burgeoning business.

The decision was made based on a basic divergence regarding the future direction of the business; with Rise focusing on project management and construction management contracts and Ian will be concentrating on development opportunities.

Ian is leaving with immediate effect. There are projects in which a joint interest will be retained until completion or suitable exit opportunities.

Bob White and Gareth Stapleton would like to thank Ian Eggers for his contribution to developing Rise and the parties commit to assisting each other in the future should the opportunity arise.