I’m happy with who I am 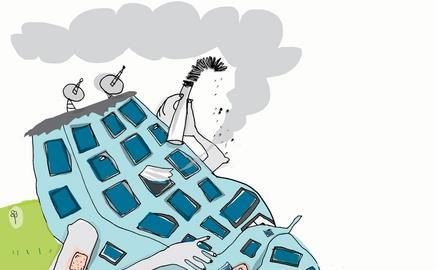 Tough rules on the energy certification of buildings come into force next year, but a survey suggests that most landlords and occupiers would rather live with a poor rating than go to all the bother of getting in shape. Thomas Lane looks at the results

What difference will the energy certification of buildings make to business and commercial occupiers? Not a lot, if the results of a survey carried out by Building are anything to go by.

We teamed up with Corenet Global UK, which represents 500 of the UK’s biggest business and public sector occupiers, such as BP and Microsoft, and property providers Land Securities and British Land, to find out how energy certification would affect its members’ behaviour. Corenet’s members will be the most affected by the energy certification of non-dwellings but, rather worryingly, 9% of respondents weren’t even aware that from next year all buildings that aren’t housing will need to be certified each time they change hands. And when it came to improving buildings, three-quarters of respondents were either going to do nothing or make only minor changes.

Better news was that more than four-fifths of respondents said energy conservation was important to them, with 60% of companies setting targets to cut energy use. The most popular way of doing this was to educate employees – 88% of respondents have already launched programmes to persuade staff to cut energy use, or are highly likely to do so.

Most respondents were planning to make minor upgrades to their portfolios, but just 3% said they would start a big refurbishment programme. Sixteen per cent said they would move into state-of-the-art low-energy buildings.

So what sort of minor improvements are likely to be popular? Changes to lighting systems and heating, ventilation and air-conditioning proved more popular than dealing with the building’s fabric – 54% said they weren’t considering improvements to the fabric, or that it was only a possibility. And comfort is clearly important to Corenet’s members – just under half said they weren’t considering adjusting thermostats to save energy, or that it was only a possibility.

So what’s holding them back from making bigger changes? The landlord/tenant divide was the main reason, either because tenants had no incentive to improve someone else’s property or because landlords weren’t interested in improving a property they weren’t going to occupy. The second most important reason for not doing anything was that it was too expensive.

Which brings us to incentives. If the government ever gets round to offering carrots to occupiers that improve the energy performance of their buildings, reduced business rates would be the most popular measure (see graph below). But that will be costly for the public purse. If energy certification really does prove as ineffective as this survey suggests, expect to see the government first using the stick of legislation to shake occupiers out of their comfort zone.

• Ninety-six Corenet members participated in the survey. About 90% of the respondents occupied or leased office space with the remainder split between retail and manufacturing.

Find out more at Think 07

Corenet Global UK will be presenting the results of the survey and a commentary at Think 07. This three-day event covers the themes of sustainability, innovation and regeneration. It kicks off at the ExCel centre in London Docklands next Tuesday, 1 May.

The Corenet session is part of an event chaired by Building’s editor Denise Chevin and is called Defining the Tipping Point for Sustainable Development. It takes place on Wednesday 2 May from 11.30am to 12.30pm.

For the full survey results, log on to www.building.co.uk/corenetsurvey