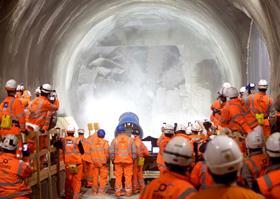 Construction industry leaders are considering asking the government to help them set up a centre of excellence in which firms can collaborate on R&D as part of a bid to boost the sector’s productivity.

The idea is among a number being considered as part of the sector’s response to the launch last week by prime minister Theresa May of a new “modern industrial strategy” for the UK. The strategy, described by May as a “a critical part of our plan for post-Brexit Britain” includes the opportunity for different industries to bid to the government to set up “sector deals” to gain policy and funding support.

The 13-strong Construction Leadership Council (CLC), which is co-chaired by Crossrail chief executive Andrew Wolstenholme, is attempting to set up an “extraordinary meeting” in the second week of February to start co-ordinating its response to the government’s industrial strategy green paper, according to council member Ann Bentley.

However, in advance of the meeting, the CLC’s Wolstenholme said he was hoping to use the industrial strategy bid to secure government help to boost both industry skills and innovation. He said any bid would look to follow the example of the automotive and aerospace industries, with which the government has co-founded innovation hubs, some of which are known as “catapult” centres. The Advanced Propulsion Centre, for example, was jointly funded by government and the automotive sector to the tune of £500m.

Wolstenholme said: “It’s early days. But there’s a real opportunity if you pool together some of the resources that firms spend on innovation, and you get a deal to match fund that from government. You can look at how the automotive and aerospace sectors have collected around the high-value ‘catapult’ centres.

“It wouldn’t necessarily need a building - but that could be an output. It would make it easy to see what value you’re getting.”

The government has called on industries to “organise behind strong leadership” in order to have a good chance of sector bids being successful. Wolstenholme said the CLC would not be the only body in construction responding to the strategy, and also said he wasn’t precious aboutsecuring just one deal under the brand of “construction”.

Wolstenholme’s preference for an innovation centre was supported by Suzannah Nichol, chief executive of construction trade body Build UK, who said it was vital the sector worked together in a co-ordinated way.

Nichol said: “Let’s have an industry conversation first, but then the next stage is what idea does the industry coalesce around? Whether it be an innovation centre, or a centre of excellence.”

The government is calling for responses to the green paper by 17 April.