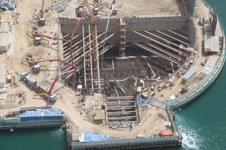 Cayan's SOM-designed 330m twisting tower will not be finished until December 2011, it emerges

The Infinity Tower, a 330m-high twisting structure in Dubai Marina, will be completed 18 months later than expected.

Drake & Scull, a UAE-based M&E contractor appointed to the project, said that the £140m tower will now be completed in December 2011.

Developer Cayan Investment & Development originally planned to open the scheme in the summer 2010, but Drake & Scull revealed that the project has been delayed. No reason has been given.

Khaldoun Tabari, chief executive of Drake & Scull International, said: “We are delighted that work has restarted on Infinity Tower, a project we are very proud to be a part of.”

The building twists 90º from its base, creating a spiral-shaped structure. It has been designed by Skidmore, Owings & Merrill, the architect behind the Burj Dubai. Arabtec is building the tower, and British firm Currie & Brown is project and cost manager for the scheme.