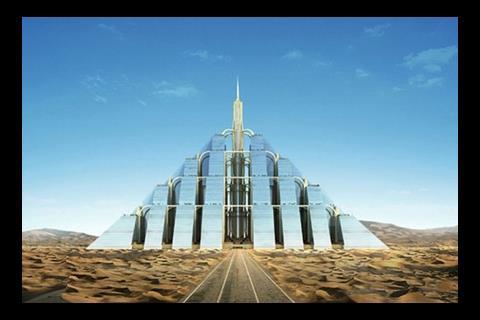 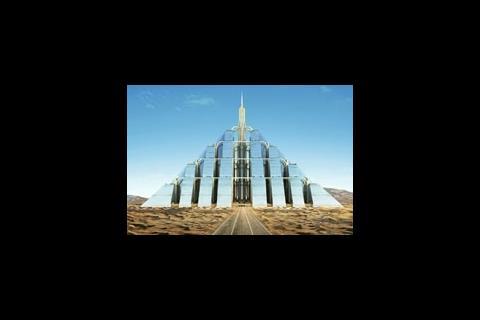 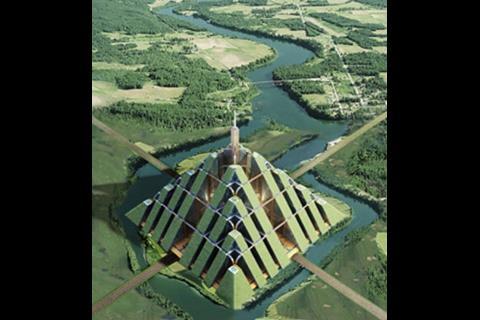 Dubai based eco-design firm Timelinks has unveiled images of its proposal for a sustainable city of the future.

Called ‘Ziggurat’, named after the pyramid-shaped temple towers of the ancient Mesopotamian valley, the project will interpret a futuristic pyramid which, according to Timelinks, could “support an entire community of up to one million people by harnessing the power of nature”.

“Apart from using steam power in the building we will also employ wind turbine technology to harness natural energy resources.”

However, the firm stresses, there is more to the 2.3km² pyramid than its green credentials.

According to Matonis whole cities can be accommodated in complexes which take up less than 10% of the original land surface. Public and private landscaping will be used for leisure pursuits or irrigated as agricultural land.

There will be some novel transport ideas too. The complex will be connected by an integrated 360 degree network (horizontally and vertically) so cars would be redundant.

Timelinks has already patented the design and technology incorporated into the project and has applied to the EU for a grant for technical projects.

Matonis said: “If these projects were realised today the world would see communities that are sustainable, environmentally friendly and in tune with their natural surroundings.”

The concept will be unveiled at Cityscape which takes place at the Dubai International Exhibition Centre from 6-9 October 2008.

Namibia may soon be home to a huge solar energy power tower. The renewable energy power plant will be constructed outside Windhoek to provide electricity supply for the capital city.

The 1.5km high, 280m wide solar updraft tower produces energy by heating air inside a vast transparent tent at the base of the tower. This hot air rises inside a tall concrete chimney, driving wind turbines linked to generators.

The tent can also be used to grow crops.

However, neither a date nor a site for the proposed tower has yet been confirmed.

International architect Gensler has unveiled the design for what could become the first LEED Platinum building in Washington DC.

To be built close to the White House, the 365,000ft² building for PNC Financial Services Group and Vornado/Charles E. Smith will feature an eco-lobby with a three-story climate wall that radiantly cools the area with flowing water, a green roof and filter storm water.

The building is expected to open in 2010.