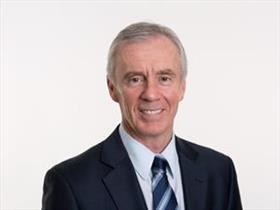 Interserve has moved to push ahead with its promised overseas expansion after appointing corporate veteran Ken Hanna as chairman of its RMD Kwikform business.

Hanna, who is currently chairman of equipment firm Aggreko and events business Arena, which helped stage the recent baseball match between the New York Yankees and Boston Red Sox at the London Stadium at the end of June, is expected to carry out the role one day a week.

He has also been appointed a non-executive director of Interserve whose chairman Alan Lovell said: “His wide-ranging senior management and boardroom experience will be a great asset to our board.”

Hanna (pictured), who turned 66 earlier this year, was chief financial officer of Cadbury for five years until 2009. The confectioner was bought by US firm Kraft in a hostile takeover the following year.

RMD has long been considered a jewel in Interserve’s crown but last year saw its revenue drop 15% to £195.5m with operating profit down a quarter to £39.6m.

RMD pulled out of a number of overseas markets in 2018 including Spain and Panama but said this year “will continue to see the expansion of [our] ground shoring products into new markets”.