Firm will build innovation centre in west London for broadcaster

ISG has won a deal worth around £40m to build an innovation centre for broadcaster Sky at its west London campus.

Designed by Atkins, the scheme at Osterley will involve building a three-storey steel and cross laminated timber frame structure. It will run across 77,000 sq ft and will be majority open plan.

ISG said all of the construction waste from the job will be diverted from landfill, adding that it will be working with subcontractors to get rid of single-use plastic packaging during the construction phase.

Sky has said it wants to become net zero carbon by 2030.

ISG, which will also carry out hard and soft landscaping, will also build an adjacent single-storey pavilion that will have enough space for 450 diners.

Others working on the scheme include project manager Gardiner & Theobald and Arup which is structural and M&E engineer. 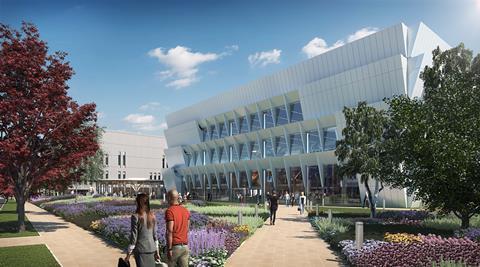 How the scheme at Osterley will look when completed