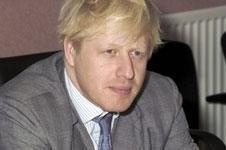 London mayor announces shortlist of artists, including Antony Gormley, to come up with 'must see' work for 2012 Games

Weekend reports said the structure would be funded by steel magnate Lakshmi Mittal and built in time for the 2012 Games.

A shortlist of five artists, including Antony Gormley and Anish Kapoor, is said to have already been drawn up and the announcement of the winner is expected within two weeks.