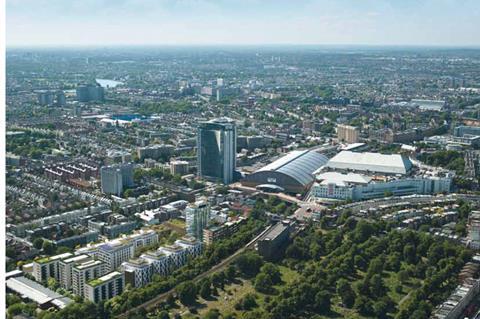 The developer of the massive £9bn Earl’s Court scheme has finalised a joint venture with Transport for London (TfL) to enable the development of the first phases of the scheme.

Capital & Counties Properties PLC (Capco) said it had established the JV with Transport for London, called the Earls Court Partnership, to enable the development of famous Earls Court 1 & 2 exhibition.

The two organisations agreed in principle to the joint venture last July.

TfL owns the freehold to Earls Court’s two exhibition centres, while Capco is the leaseholder of both sites.

The new joint entity will own 999 year leases over the sites, with ownership split 63% to Capco and 37% to TfL.

The joint venture will employ Capco as development manager to develop out Sir Terry Farrell’s masterplan for the 20 acre area currently occupied by the exhibition centres.

The deal is part of the wider 77 acre scheme, which will create a 7,500-home neighbourhood, along with offices, leisure, hotel and retail space, a primary school, library, an integrated health centre and five-acre public park.

Gary Yardley, investment director of Capco, said: “The re-imagination of Earls Court is moving forward and presents a unique opportunity to establish a new address in central London.”

Graeme Craig, director of Commercial Development of TfL, said: “This is the first example of our new approach of retaining and investing in our assets across London, working in partnership with leading developers like Capco, which will deliver real long-term value for fare and taxpayers.”

Eversheds was lead legal adviser to TfL on the joint venture.