Just one quarter of industry consider CITB ‘credible and reputable’

Only 26% of the industry believes the CITB is “credible and reputable”, according to the training body’s latest annual report and accounts.

At the time, the board said it plans to get the percentage of people agreeing it is “credible and reputable” up to 56% by 2020/21.

But in its latest annual report, which includes the results from an employer and stakeholder survey, the CITB had not only revised its 2019-20 target down to 33% but failed to even hit that – with the report saying just over a quarter classifying it as such.

It was not the only board key performance indicator to be missed, with just three of the 12 goals for the 2019-20 year being met or exceeded.

The CITB, whose chief executive Sarah Beale is set to leave in September, had been aiming for 30% of employers to say there was a talent pool sufficient to meet industry’s recruitment needs. Only 22% said this was the case.

The stats also revealed that only 49% believed CITB was a trusted source of information.

The report said that CITB had supported the training of nearly a quarter of a million construction workers in the last financial year.

The annual report, which was laid before Parliament last week, showed that in the 12 month period ending 31 March 2020 more than 15,000 construction employers and over 20,000 apprentices were supported by CITB.

The report also revealed that Kier had received the biggest cash support for training of any firm, with the contractor receiving £1.96m.

It was followed by Taylor Wimpey, which was handed £1.76m, and O’Rourke Investments, a division of Laing O’Rourke, which was given £1.57m.

The CITB has previously said it anticipates collecting just £73.8m in 2020/21 from its levy due to the covid-19 pandemic crisis. This is down from a forecast of £198m before the crisis.

The organisation collected £188.2m in 2019/20, when its overall income was £273.77m against expenditure of £283m. Levy collection was suspended from late March last year until September.

The accounts also revealed the CITB had taken a loan of £10m from the education department to support its 2020/21 cashflow in the wake of the pandemic. 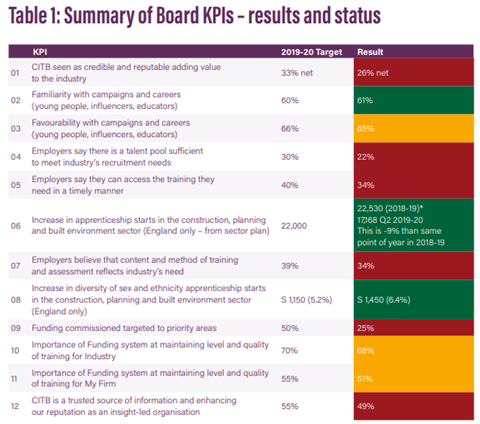