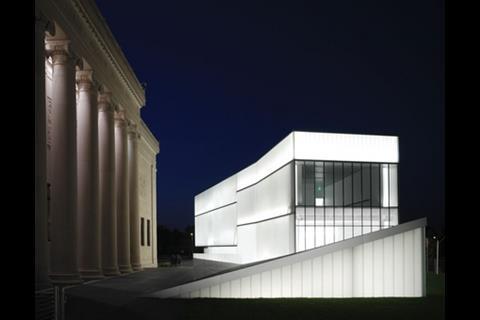 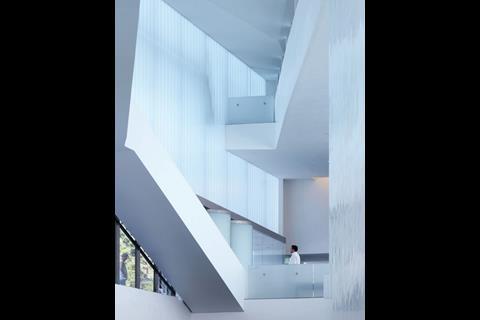 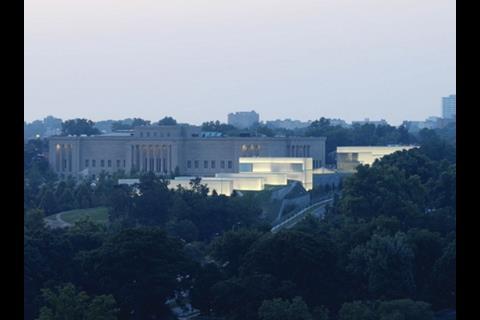 Light-filled interiors serve as galleries as well as a cafe, bookshop and library

Top US architect Steven Holl’s £100m glass extension to the Nelson-Atkins Museum of Art in Kansas City is due to open next month, eight years after the practice won an international design competition.

The 5,000m2 extension, called the Bloch building, takes the form of five pure glass blocks that appear like lenses and stand in luminous counterpoint to the 1930s neoclassical stone museum. Holl said the idea of the “complementary contrast, the stone and the feather” drove the design.

All the lens-like blocks are clad in translucent insulated planks which, at times, materialise like blocks of ice. During the day, the glass admits varying qualities of light into the galleries, while at night they glow with their internal light, adding to the existing sculpture garden. The blocks gradually step down through the park and alternate with narrow stretches of landscaping.

The extension provides a cafe, bookshop and library, in addition to museum space.

Steven Holl Architects was founded in 1976 and has 49 staff in New York and Beijing. Its work includes the Vanke Center in Shenzhen, China, and the New York University Department of Philosophy.

The extension was built by JE Dunn Construction with Guy Nordenson & Associates as structural engineer and Arup with WL Cassell Associates as services engineers.