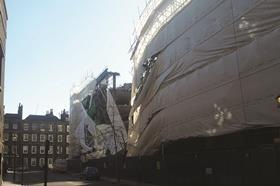 Building in Holborn’s Portugal Street that part collapsed on Monday

The chief executive of Keltbray Brendan Kerr has expressed his “shock” after 100 construction workers and people in nearby premises had to be evacuated when a building the company was demolishing in central London part-collapsed earlier this week.

Speaking to Building, Kerr said: “We are genuinely shocked. We had an experienced team working on the project, some of whom have been working for us since 1993. All floors had been stress-tested by a structural engineer.”

Keltbray had been working on the building in Holborn’s Portugal Street conducting a top-down demolition when the uncontrolled collapse occurred, pulling down scaffolding surrounding it. One person, who was injured in the collapse, was discharged from hospital on Tuesday.

Over 100 workers were evacuated from the building site as well as a further 100 people from nearby premises including the London School of Economics after the incident at 4.14pm on Monday.

Work on site was suspended on Tuesday while an inspection team from the Health and Safety Executive investigated the cause of the building’s collapse.

Keltbray said that it has been allowed back onto the site to make the structure safe but it is not known when the full demolition of the building will be allowed to go
ahead.

Paul Deacy, managing director of Keltbray Demolition & Civil Engineering, said: “The HSE visited the site on Tuesday, but we have been allowed to go back to work to make the structure site in the immediate vicinity.

“We will be re-assessing the project demolition due to the unforeseen collapse and the inherent defects in the structure. We will be submitting a report to the HSE in due course outlining the next steps we wish to take to continue with the project.”

The emergency services were called to the site in Holborn shortly after the incident occurred. London Fire Brigade station manager John Snelgrove, who was at the scene on Monday, said: “When the first crews arrived they found the building, which was under refurbishment, had collapsed between the fifth and second floors.

“Firefighters gave first aid to an injured man on site until ambulance crews arrived and also helped police put safety cordons in place and to evacuate people from the immediate area.”

Around 30 firefighters and officers attended the incident.