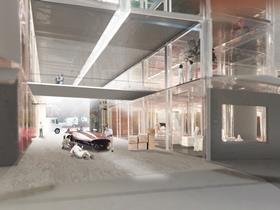 Kier has won a prized deal to build a new complex for the Royal College of Art at its Battersea campus in south London.

The 15,500m2 centre will feature workshops and manufacturing facilities across a four-storey studio building and eight-storey research building.

The development, which is on the college’s South Campus, forms part of the university’s plan to move into science, technology, engineering and maths at post-graduate level.

The buildings were designed by Herzog & de Meuron – the Swiss practice behind the Tate Modern extension.

Kier is joined on the job by the UK’s largest consultant, Mott MacDonald, who is providing building services, civil and structural engineering and cost consultancy.

Construction is due to be completed in summer 2020.