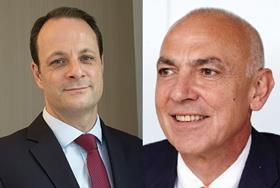 The bosses of Kier and Mouchel have said their takeover deal breaks the mould by combining heavyweight contracting and consulting expertise.

Contracting giant Kier agreed a deal yesterday to pay £265m for consultant Mouchel, creating a combined company with a £9.3bn order book and a leading market share in the UK highways sector.

Rumbles said: “A lot of merger and acquisition activity has been about adding on more of the same [contracting to contracting, or consulting to consulting].

“The nice thing about this deal is Kier is adding in our asset advice and high level consulting and I think the market has been looking for that.”

One of the few UK contractors to buy into consulting in recent years, Balfour Beatty, sold its consulting arm Parsons Brinckerhoff to WSP after just five years last November.

To finance the Mouchel transaction Kier will launch a £340m rights issue.

Kier and Mouchel said that once their road contracts were pooled together, the combined firm manages around a third of the UK’s road network.

Mursell confirmed one of the big attractions of the deal for Kier was acquiring a “sector leading position in the highways market”, including places on the Highways Agency’s valuable trunk road maintenance frameworks, as he revealed to Building in March.

Both Mursell and Rumbles insisted there would be “very few” job losses as a result of the deal. Rumbles argued the deal was about “creation of jobs, not job losses”, with job losses restricted mainly to duplicated “corporate functions”, including “my job, and my CFO”.

Rumbles said he would step down when the transaction closed, but would be “available to Haydn and the Kier team” if help was needed after that on strategy.

The deal is the culmination of a remarkable turnaround in Mouchel’s fortunes over the past four years.

Mouchel was forced to delist from the London stock exchange, restructure and sell up to its banks in 2012 following a run of bad financial news the previous year, including an £8.5m blackhole uncovered in its accounts, which prompted the-then chief executive Richard Cuthbert to step down and make way for Grant Rumbles in October 2011.

Rumbles has led a transformation in the company’s fortunes, with the firm posting £16.5m pre-tax profit on £616.6m revenue in its latest financial results for the year to September 2014.

Rumbles said “it was no secret” Mouchel was considering its exit options last summer, including a potential re-listing on the stock exchange, but said he was “very very happy” with the outcome of a sale to Kier.