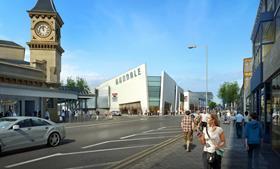 Kier is set to start work on an £85m extension to a shopping centre in Eastbourne after developer Legal & General agreed funding for the scheme.

L&G said it has partnered with a “major international investor” to fund the extension to the Arndale shopping centre as well as its wider £220m regeneration programme.

The developer said a contract is now in place with Kier after it secured extra funding for the project.

Construction on the 175,000 sq ft extension – which brings 22 new retail units, 300 extra car parking spaces, seven restaurants and a nine-screen cinema to Eastbourne’s town centre – has already started and is expected to be finished in autumn 2018.

“We have already secured a host of excellent retailers for the extension to include a major cinema operator as well as many popular restaurants in a boost to both the town’s day time and night time economy.”