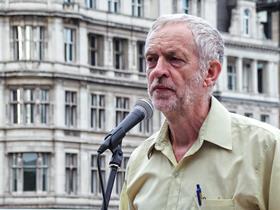 Labour leadership front-runner Jeremy Corbyn has outlined plans to establish a National Investment Bank to promote multi-billion infrastructure upgrades and support innovation if the party win the next election.

The MP for Islington, who until recently had been expected to finish last in the race to replace Ed Miliband as the Labour leader, announced the plan as part of a new economic policy which would raise funds by reducing corporate tax relief, allowing the Bank of England to undertake a new round of quantitive easing and craking down on tax evasion. The plan is predicted to raise approximately £93bn from cutting corporate subisidies and tax breaks.

Titled The Economy in 2020, the document promises to upgrade the UK’s “outdated” infrastructure, it states: “Our national infrastructure - energy, housing, transport, digital - is outdated, leaving the UK lagging behind other developed economies […]

“To invest in infrastructure also requires a clear strategy in the construction, manufacturing, and engineering skills to build and maintain that new infrastructure so vital to sustainable economic growth.

It is the first time Corbyn has outlined his economic policy and comes as the battle for the Labour leadership intensifies. A You Gov poll for the Times showed that Corbyn had taken the lead in the race which also features former Health secretary Andy Burham, Yvette Cooper and Liz Kendall.

On Wednesday former PM Tony Blair warned the Labour party against moving to the left, saying that people whose heart was with the leftwing candidate should “get a transplant”.