Laing O’Rourke has appointed a new chief financial officer to succeed Stewart McIntyre who steps down in September.

Rowan Baker joins from McCarthy & Stone where she is currently chief financial officer. She joined the firm in January 2012 and sits on the four-strong board at M&S which is chaired by former Balfour Beatty managing director Paul Lester.

Before joining the specialist retirement housebuilder, the 46-year-old worked for Barclays Bank and accountant PwC.

She said: “I believe [Laing O’Rourke’s] pioneering focus on modern methods of construction, digital engineering and its direct delivery model via its own construction workforce, position it well to win new business in a sector set for change.”

Baker will report directly to chief executive Ray O’Rourke and will see sit on the firm’s executive committee and group board.

McIntyre (pictured below) will retire from the group in March next year but will oversee putting together the firm’s 2019/20 report and accounts for the year ending March 2020 which are expected to be published this autumn.

The 64-year-old Scot joined O’Rourke in late 2014 from luxury yacht manufacturer Sunseeker where he was managing director. 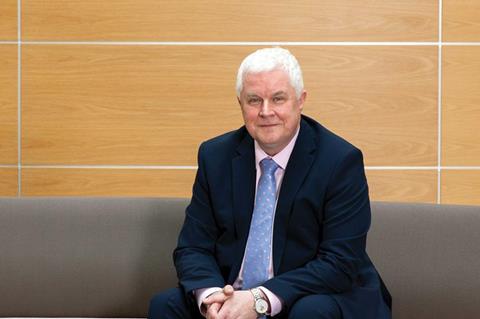 He oversaw the firm’s refinancing which was completed in February last year after nine months of negotiations and earlier this year he told Building: “It was really, really difficult.”

In the same interview he admitted his current role was his last big job and is expected to use his retirement to go travelling.