All the latest launches and specifications, including security doors at Canary Wharf’s latest tower and some show-stopping windows at Adele’s old school 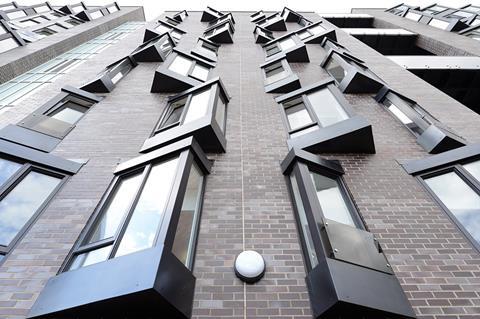 NorDan supplied its NTech 1.2 tilt-and-turn aluminium-clad timber windows for Scape Student Living accommodation in central London. The company says that being on a busy, noisy road, sound reduction was important and this was one of the reasons that NorDan was chosen; it claims the timber windows achieved a sound reduction of 50dB Rw. The firm also says the windows had a simple uncomplicated design with an easy to operate mechanism.

Eurocell has worked alongside partner company Dorwin to provide a bespoke architectural window solution as part of the £5m refurbishment at the Brit School, Croydon. The range of window profile systems offered by Eurocell allowed Dorwin to design, manufacture and install the replacement windows for all three phases of the refurbishment and new-build project at the school. Bespoke vertical sliding sash windows were required around the school’s staging area, which were specified white externally and matt black internally. The two companies identified a method of applying matt black acrylic paint directly to the profile, creating an extremely tough finish. In total, over 400 windows were specified, which the partnership says were delivered within budget and exactly to schedule. 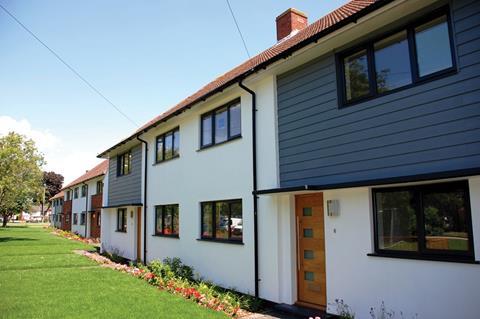 The Rowner Estate in Portsmouth, a former Ministry of Defence housing estate that was built for naval personnel and their families during the sixties, has been refurbished into private housing. Eclipse PVCu doors and windows manufactured by Halo were chosen by Window Warehouse, the fabricator and installer. The company says the Eclipse range was chosen as it met its energy and security standards, but was also aesthetically attractive with slim sightlines and the option of a grey foil finish.

Timloc has launched its latest range of beaded access panels, which it claims provide a modern alternative to traditionally styled plasterboard-faced access panels. Timloc’s access panels are designed for use in dry-lined walls and ceilings that are pre-plaster skimmed. They consist of a metal-faced door skin with a powder-coated finish to facilitate over-painting. The door skin is inserted into a perforated frame that leaves a plaster-beaded edge around the door aperture. The result is a concealed access door with no visible frame. Fire-rated and non fire-rated versions are available.

Smart Architectural Aluminium launched its Visoglide Plus sliding door at Ecobuild, which it says offers the same contemporary styling and robust performance as the rest of the Visoglide range with the additional benefit of exceptional thermal performance. The door has been designed for large commercial and high-end residential projects, and is available in a range of sizes of up to 2.6m x 7m with the option of auto-slide gearing. There is also an option of a triple-track format, with three sliding panes allowing an opening aperture of up to 75%. All the main sections feature an extended Polyamide thermal break, which the company says allows the system to achieve a U-value of 1.6W/m²K when installed with a suitable sealed unit. 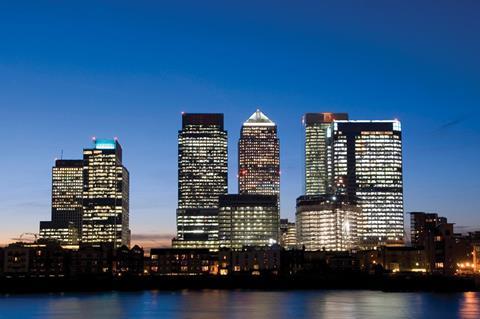 ASSA ABLOY designed, manufactured and installed over 700 steel doorsets for the 23-storey office building at 25 Churchill Place at London’s Canary Wharf. The features of the heavy-duty doorsets include being fire-rated, acoustic and blast-rated with electrohydraulic door operators. Roller-shutter doors were installed for extra security as well as bespoke steel doors with a flush astragal profile on all main access routes. The firm says the doorsets were chosen to withstand the heavy traffic expected and specified to meet fire safety and building efficiency measures.

Conservation sash windows by Mumford & Wood have been specified for the remodelling and extension of a seventies family home in Kent. The layout of the property has been reconfigured and the company says new window openings have given a more symmetrical appearance. High-performance double-glazed sash windows have replaced the original casement windows in the front of the building.

Leaderflush Shapland has developed a wedge-shaped seal, EcoGuard, which is designed for application between the gaps of a door frame and surrounding wall during installation, which it says offers a more precise and dry fit. The wedge shape accommodates varying gap widths around the perimeter. The firm says EcoGuard offers accurate and even coverage around the perimeter of the frame in one clean and simple on-site application. Leaderflush Shapland also claims EcoGuard provides up to 30 and 60 minutes fire resistance.