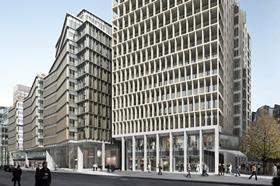 As Building revealed in September, Lend Lease won the job to build the Lynch Architects-designed scheme at 66-74 Victoria Street, which is part of Land Securities’ 2 million ft2 redevelopment of the area.

The contract win keeps Lend Lease in pole position, after it jumped to the top of the contractors’ league table for September on the back of winning the £300m deep-water port in Liverpool, known as Liverpool 2.

Vinci Construction was the big mover in the work including civils league table, up from 28th position in September to 3rd last month, after securing 30 projects totalling £108m.

The news came as the CPA/Barbour ABI construction index rose from 110 last month to 112 - the second consecutive month of improvement. The index, compiled by the Construction Products Association (CPA) using data from construction information firm Barbour ABI, measures contract awards and uses a January 2010 base of 100.

Since April, when a surprise rise in activity pushed the index to 119, it has fallen every month, until a rise of three points last month.

He said it was a mixed picture across different sectors, with falls in public housing and health offset by contract awards in some of the private construction sectors.

The slight rise was tempered by the Office for National Statistics’ revision to the construction output figures for Q3, a 2.6% fall rather than the 2.5% fall initially estimated.