Listed Bromley Town Hall to be turned into hotel

A £20m scheme to turn a grade II-listed town hall in south-east London into offices and a hotel has been given the green light by local planners.

Developer Castleforge Partners appointed architect Cartwright Pickard to come up with 73,000 sq ft of office space and a 24-bedroom hotel. 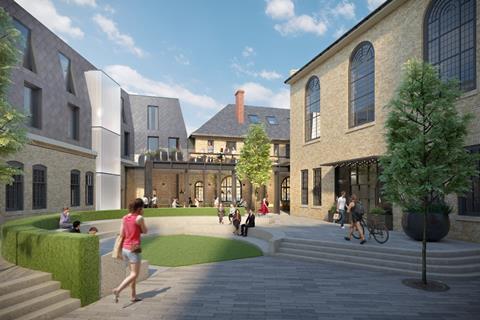 The scheme will include a landscaped courtyard

The hotel will be housed within a two-storey roof extension clad in metal shingle, with the offices located in the town hall’s existing loft.

Built in 1906, the building was extended in 1939. The council moved out nearly 40 years ago with the local college moving in before it left in 2007.

The building has been empty since and is currently on Historic England’s Buildings at Risk Register.

The scheme, which has been backed by the government’s heritage adviser, is being project managed by RISE.

It was used as a location for parts of the 2018 film about Queen called Bohemian Rhapsody.