Liverpool has been given the green light for its £60m Anfield Road stand expansion paving the way for Buckingham to begin construction work.

The club wants to add 7,000 seats to the Anfield Road end of the ground – the stand opposite the Kop – under plans drawn up by architect KSS. 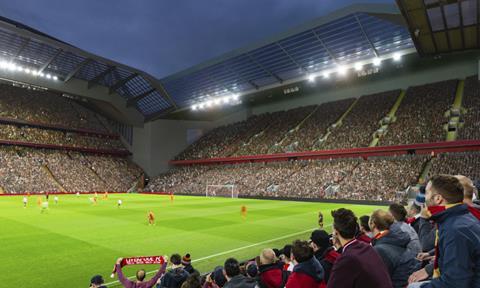 The earliest estimation for the project to be completed is the summer of 2023, meaning Liverpool would be looking to start work on the 18 month project by early next year.

Buckingham is currently building the new Riverside Stand at Championship side Fulham’s Craven Cottage ground after pipping Sir Robert McAlpine to the job.

McAlpine had run the rule over the Anfield Road job as well but the Reds and its US project manager Legends decided to open up talks with smaller firms including Buckingham and Commonwealth Games main stadium builder McLaughlin & Harvey.

Buckingham came second to Carillion in the race to win the last major development at Anfield – the £75m main stand which opened in 2016.

Buckingham has worked on a number of Premier League grounds in recent years, including the new Spurs stadium and Brighton’s new ground.

Others working on the Anfield job include project manager Arcadis and QS Turner & Townsend.

The plans have been on hold because of the pandemic and changes to the design. The club had originally hoped the scheme would be finished next summer.