According to the latest CIPS/IHS Markit PMI data, there was a marginal decline in UK construction output, as well as a slowdown in new order growth which fell to its weakest since last June. 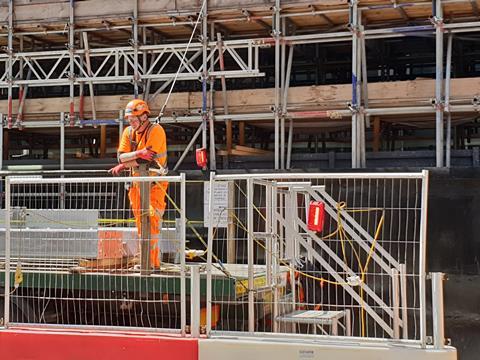 There was the first reduction in activity since May last year

At 49.2 in January, down from 54.6 in December, the headline seasonally adjusted IHS Markit/CIPS UK construction total activity index signalled a decline in overall construction output.

This was the first time it dipped below the 50.0 no-change mark since last May.

The report said construction companies surveyed often noted that the third national lockdown and concerns about the near-term economic outlook had led to greater hesitancy among clients, especially for new commercial projects.

The renewed fall in commercial activity, which fell to 46.2 from 51.2, and another drop in work on civil engineering projects, from 48.0 to 45.0, stood in contrast with strong growth in the residential category, which recorded a score of 57.1.

Despite this, the latest increase in housebuilding was the slowest since the rebound began in June last year. In December, it posted an index figure of 61.9.

There were also reports of a “severe” downturn in material supplier performance in January due to transport shortages and delays.

According to the report, around 45% of the survey panel reported longer lead times for the delivery of construction inputs, while only 1% noted an improvement.

Mark Robinson, group chief executive at Scape, said: “Global trade and border control issues continue to test contractors in terms of material supplies while the ongoing impact of the new variants of covid mean sites are facing greater challenges around absenteeism and productivity.

“All of this is naturally dampening some of the relative optimism we saw last year, and the pace at which the industry is able to drive the UK’s economic recovery.”