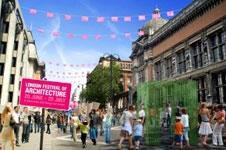 Some of the events that caught our eye at London's summer architecture festival - our hublights, if you will

It’s the opening weekend of the London Festival of Architecture, and there are hundreds of events going on. Get on over to www.lfa2008.org for the full list, but here are the five we’d recommend you attend in this week’s featured hub, Kensington, Chelsea and Knightsbridge, plus five of the week’s highlights elsewhere in the capital.

21 June
The hub’s curators, the RIBA Trust, have negotiated the closure of Exhibition Road for the day to allow pedestrians free reign. Not only can visitors help build a Foster + Partners design, they can visit installations by 6a Architects, Tonkin & Liu, Penoyre and Prasad and Paticas Architecture.
Where? Exhibition Road, South Kensington
When? 10am – 6.30pm

20 June – 20 July
28 foreign embassies present their country’s foremost architects and designs. Tour the built environments of Brazil, Colombia, Denmark, Italy, Japan and much more. Also, an exhibition on the cityscapes of Edinburgh and Glasgow
Where? The British Council, 10 Spring Gardens, Kensington
When? 10am – 5pm

22 June – 16 July
A sound installation by renowned artist/designer Dody Nash – sit in a sculptural sound garden in the heart of Chelsea. Accompanied by short theatre pieces on the theme of guerilla gardening. Viva el Carnation!
Where? Chelsea Theatre King’s Road

20 – 24 June
A walking tour around the architectural hotspots of the country’s highest density suburb (or so the legend has it). Take in the modernist architecture of Peter Jones, the “giant cocoon” of CF Møller’s Darwin Centre and finish by Gustafson Porter’s controversial yet sympathetic Diana Memorial Fountain.

24 June
One of a series of talks with such luminaries as Janet Street-Porter, Jon Snow, and Mark Wallinger, this morning’s breakfast is with Sir Michael Bichard, chairman of the Design Council and the civil servant responsible for the introduction of the Learning and Skills Council.

Highlights this week elsewhere at the Festival include

Keep next weekend free for the activities of the next featured hub – Canary Wharf, Stratford and the Greenwich Peninsula.