City based contractor Od Projects has nabbed the lead role on the revamp of iconic north London music venue Koko.

The legendary Camden club, which over the years has hosted the Rolling Stones, Motörhead, Prince and Oasis, is undergoing a refurbishment which will see a private members club, boutique hotel and recording studio added to the grade II listed venue.

The main contractor role is expected to be worth around £20m to Od Projects, a subsidiary of Od Group which is based close to Liverpool Street in the Square Mile.

It is one of the largest deals the firm has worked on with work kicking off in earnest next month and wrapping up in early 2020.

The venue, where Charlie Chaplin performed in its original incarnation as a theatre, will continue to operate while work is ongoing. 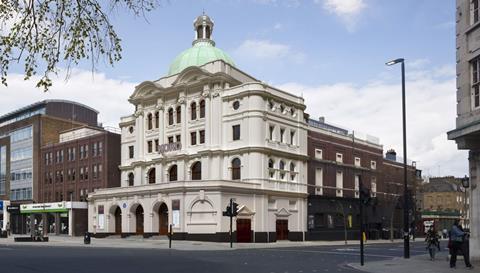 How the revamped venue will look

Archer Humphryes Architects’ plans for the project were approved by Camden council last May, while consultant TowerEight, which recently beefed up its management board, is providing project management, QS and employer’s agent services on the job.

The makeover will also see the conversion of Koko’s dome into a bar, topped with a new cupola based on original proposals for the 1900 building. New terraces are set to be created, including a fourth-floor glazed roof extension to provide a bar and restaurant.

The 78,000ft2 scheme will retain the existing 1,500 capacity music venue and also includes a full rebuild of the adjoining Hope & Anchor pub.