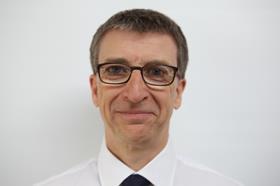 Jackson Coles has fought off tough market conditions to grow its turnover for a third successive year, with roles on some major London schemes helping the consultant post a 9% rise in revenue.

The 53-strong consultant is project managing the £65m AHMM-designed 240 Blackfriars Road in London for Great Portland Estates – which will become the home of Building’s publisher UBM from 2014 – and the £17m Piercy & Co-designed Turnmill building for Derwent London.

These schemes have helped the consultant grow its turnover by 9% to £5.1m for the financial year ending 31 March 2012, from £4.7m the previous year.

This growth in revenue helped Jackson Coles rank 24th in Building’s list of the fastest growing consultants in September and the firm also ranked 11th in our list of the top financial performers of the year, based on a 5.7% rise in fees per staff member to £110,900.

Managing partner Richard Jones (above) attributes the firm’s success to its “strong reputation for quality”, particularly in the London commercial and high-end residential sectors.

He also says the firm is benefitting from an influx of overseas money into London and from clients reacting against consolidation in the market and the creation of big corporate consultants.

[The client] wanted to deal with people who were doing the business, rather than a big corporate entity

As an example, Jones says the firm is working with an undisclosed “Asian client” that had talked to “all of the big guys” but opted to work with Jackson Coles because “they wanted to deal with people who were doing the business, rather than a big corporate entity.”

Jackson Coles is working with a range of international clients, defying the conventional wisdom that major consultants with international networks are best placed to win work with overseas clients in the UK.

These international clients include three different groups of Qataris, two Greek firms, and a Malaysian and a Japanese outfit.

Jones says the international investment “seems to be growing rather than receding” and is frequently “long term investment”, with some of the clients looking at “500 plus residential unit developments over a five to 10 year period”.

The firm is also starting to grow its international workload serviced from the UK, but only “by invitation in places we know”. These international projects include a £30m-40m project in Paris, Jones says.

But back home the gloomier picture in the UK regions has forced Jackson Coles to close its regional office in Leeds at the end of last year, leaving it with just two offices in London and Milton Keynes.

Alan Tovey – who previously headed up the Leeds office – says all but one surveyor kept their job after being transferred to work in the London office.

Despite the tough UK market, Jackson Coles has posted a profit every year through the recession and subsequent recovery but declined to disclose profit figures.

The company is currently on-site with construction of the Pace Gallery extension to the Royal Academy of Arts and the Donmar Warehouse theatre in London.

Outside London the firm delivered the Brockholes Nature Reserve Visitor Centre in Preston and helped construct “the largest bench in the world”, a tourist attraction in Littlehampton.

Jackson Coles at a glance