London Underground prepares for the worst 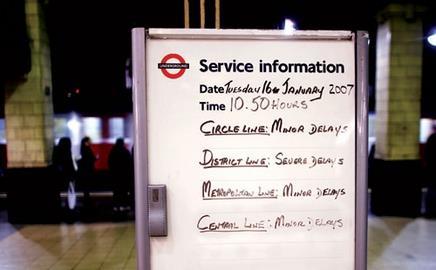 A spokesperson for LU confirmed that it had fall-back plans in case Metronet stopped trading. He said: “At an organisation like LU we are prepared for any eventuality. This would include taking over some maintenance work. “

The news has emerged since Metronet disclosed last Friday that it was seeking £400m of emergency funding so it could continue to carry out its contractual obligations. It is asking for the funding to be paid to it over the next 12 months through an increase in thefour-weekly infrastructure service charge it receives from LU.

Metronet has asked the independent arbiter, who last week started an extraordinary review into who should pay what towards £992m of cost overruns, to take an immediate decision. It expects to be informed of the decision within weeks.

Andrew Lezala, chief executive of Metronet, insisted that the company would continue to operate, despite the request for money. He said: “We are confident we will deliver the complete range of contractual obligations in the current 7.5-year period.”

That runs until the end of September 2010 and is just the first part of a 30-year contract.

The first part of the extraordinary review covers the renewal of the Bakerloo, Central, Victoria, and Waterloo & City lines. The firm claims it is owed £992m for cost overruns on station upgrades because the client has significantly increased the scope and specification of the projects.

It is expected to launch a second review in August to recover a further £1bn or so for overruns on the Circle, District, Metropolitan, Hammersmith & City and East London lines, citing the same grounds.

LU said it did not believe it was liable to pay any more to Metronet, either for the cost overruns or the infrastructure service charge.

Tim O’Toole, the managing director of LU, said: “We believe that Metronet should be drawing on its own sources of funds, rather than seeking more from the public purse”.