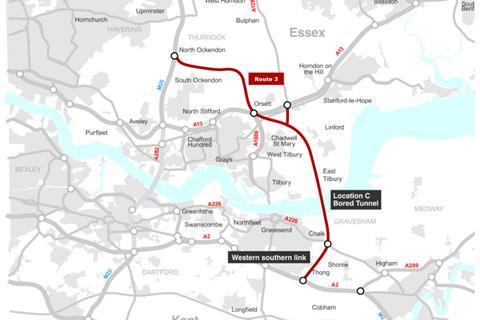 The government has confirmed its preferred route for a new tunnel under the River Thames.

The route chosen will cross under the river east of Tilbury in Essex and Gravesend in Kent creating a link between the A2 and the M25.

It is hoped that the new crossing will alleviate the congestion on the Dartford Crossing.

A further £10m will be invested in improving the flow of traffic around the existing crossing and studies into ways of tackling congestion.

It will be the first road tunnel under the Thames since the Dartford Tunnel which began construction in 1963.

The full new route will run from the M25 near North Ockendon, crossing the A13 at Orsett before heading under the Thames east of Tilbury and Gravesend. A new link road will then take traffic to the A2 near Shorne, close to where the route becomes the M2.

Transport secretary Chris Grayling said: “The new Lower Thames Crossing, and other improvements in and around Dartford and Thurrock announced today, will further strengthen our economy while also creating thousands of jobs.

“In addition to the Lower Thames Crossing, the government is investing a further £66m to widen the A13 Stanford-le-Hope bypass from 2 to 3 lanes. This will help create more than 4,000 jobs and unlock the development of hundreds of new houses, and improve links to Tilbury and new London Gateway ports. This investment is part of a £78.85 million Thurrock Council project scheduled to be complete by the end of 2019.”