Maccreanor Lavington gets OK for another Old Kent Road tower

Maccreanor Lavington has chalked up another planning win from Southwark council with a 28-storey tower near the Old Kent Road in south-east London.

The mixed-use scheme will see a 28-storey tower (pictured) and a six-storey podium providing 253 new homes, 35% of which will be affordable. 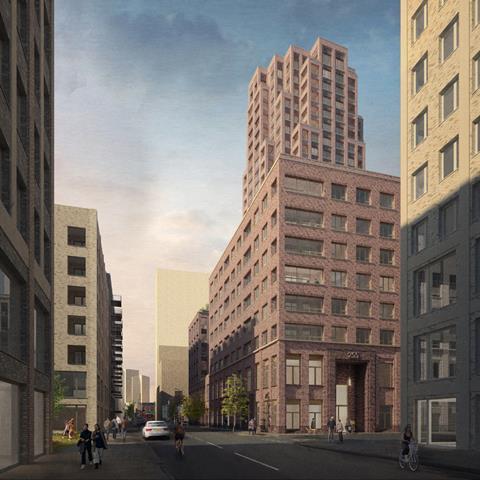 The entire complex will be built above a 38,500sq ft double-height warehouse, a feature which Maccreanor Lavington says has helped the planning application since the site, which is at the edge of a warehouse district, is classed as strategic industrial land.

The scheme’s client is the site’s current occupier, Leathams, which operates a food distribution operation from the premises and will be relocating.

It is the third green light the architect has chalked up in the area, which is currently seeing a host of new projects as part of Southwark council’s bid to build 20,000 new homes over the next 20 years.

At the end of last year, the practice secured approval for the 22-storey Ruby Street Triangle scheme and a 39-storey tower.

Southwark council hopes that the housing drive will encourage a proposed extension to the Bakerloo line to Lewisham via the Old Kent Road.