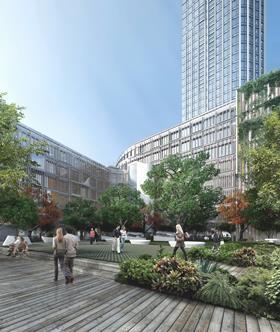 As Building revealed in September, Mace was in the final stage of discussions with developer CIT Group.

The Kohn Pederson Fox-designed plans focus on the retention and redevelopment of the existing King’s Reach Tower and adjacent podium building, which have been empty since 2007. The scheme includes 370,000 sq ft of offices, 72,000 sq ft of shops and 173 flats.

For the past two years Mace has acted as pre-construction adviser to the CIT Group assisting in gaining planning consent, providing construction and logistics advice, programming and explaining the demolition and construction processes to the local residents.

The internal core of the tower will be modified to accommodate high quality residential properties on the top 25 floors. The lower nine floors of the building and the podium with accommodate office space.

The final part of the re-development is the upgrading of the existing retail area which includes the relocation of the existing pharmacy and HSBC bank. Final plans include a health club and swimming pool.

The scheme won planning permission in July 2011 and work is due to start in January, with the project expected to be complete by the end of 2015.

Executive director at Mace, Nick Moore, said: “This is a significant project that will re-shape the community by introducing a high-end residential, mixed use development and give new life to the heritage site.

“The team face the challenge of redeveloping the building in a densely populated, residential area but are looking forward to delivering to the high standards that CIT come to expect from us.”