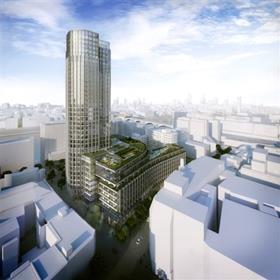 Building understands the contractor is in the final stage of discussions with developer CIT Group, with the appointment expected in the next few weeks.

According to Barbour/ABI, the contract is worth around £100m.

The Kohn Pederson Fox-designed plans focus on the retention and redevelopment of the existing King’s Reach Tower and adjacent podium building, which have been empty since 2007. The scheme includes 370,000 sq ft of offices, 72,000 sq ft of shops and 173 flats.

The scheme won planning permission in July 2011 and work is due to start in January, with the project expected to be complete by the end of 2015.