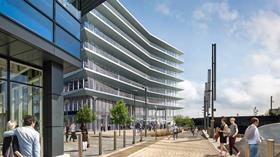 Mace is carrying out its second fit-out job for the taxman at its new South-west regional base in Bristol.

Mace’s interiors arm, which has dropped the Como name, is now working on HMRC’s new office at 3 Glass Wharf, next door to Bristol Temple Meads station.

The £75m, eight-storey building (pictured) has been designed by Darling Associates and was completed by Wates in February this year.

Now Mace has begun work to fit out the 100,000 sq ft of space with the first of HMRC’s expected 1,400 staff at the building due to move in later this year.

Mace completed fit-out work at HMRC’s pilot hub scheme at One Ruskin Square in Croydon nearly two years ago. This was built by Lendlease and designed by architect ShedKM.

Work on 10 of the 13 hubs is already underway with fit-out firms eyeing the blue riband deal for HMRC’s second London site at Stratford.

HMRC signed a 25 year lease with Westfield Europe at the 240,000 sq ft scheme at 14 Westfield Avenue, in the shadow of the Westfield Stratford shopping complex, which is expected to be home to 3,800 staff towards the end of next year.

Designed by SimpsonHaugh, HMRC is set to take eight floors of the 12-storey block which is being built by Westfield’s in-house construction arm.