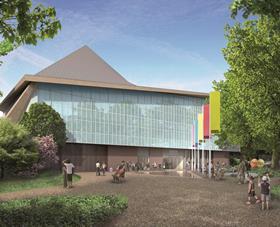 Peter Rogers, director at developer Chelsfield Partners, said that Mace had effectively been appointed to work on the first phase of the prestigious project.

However, he added that a decision on whether the firm would be named as main contractor for the entire scheme would not be made until the contractor provided a fixed price.

“We’re doing enabling works with [specialist contractor] Keltbray and preparing the piling, with Mace acting as construction manager for that stage,” Rogers said.

“It’s an unusual and tricky project. The parabolic roof is highly complex and we will need to repair that and bring it up to current codes.”

QS on the scheme is Davis Langdon with Arup acting as engineer. A separate luxury housing scheme on the site is being designed by OMA and Allies & Morrison.

The Design Museum will move into the Commonwealth Institute building in 2014. It is currently based in Shad Thames, close to Tower Bridge.