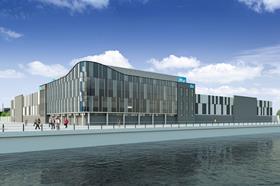 Mace is having to rebuild sections of ITV’s new Coronation Street studio after problems arose on part of the steel frame on the project.

As Building first revealed in July, construction on the new Coronation Street studios building in MediaCity, Manchester, was hit by delays after problems were identified on part of the structure’s steel frame.

Building understands the steel frame began to move beyond its design tolerances while concrete was being poured on the site in late May. Work was halted on the part of the site affected and the area was cordoned off while the structure was assessed.

At the time Mace, the construction manager on the project, said it was working to identify “the most appropriate strategy to remediate the steel frames” on the building.

Now it has emerged that Mace has decided to pull down parts of the partially built studio where the problems were identified and rebuild the structure. Work to remove and replace the steelwork on the building - which is to be home to a sound stage for the soap opera - is now underway.

It is understood that the problems could lead to several months delay on the job, understood to be worth around £30m, which was originally set for completion in Spring 2013. The project is not now expected to be completed until near the end of 2013.

The new ITV studios are being built on a 7.7 acre site at Trafford Wharf, adjacent to the Imperial War Museum North. The project includes a new external film set for Coronation Street, as well as two sound stage buildings, specialist production facilities and offices as well as dressing rooms and meeting space for production staff and cast.

A Mace spokesperson said: “Mace confirm they are managing the reconstruction of the partially-built stage areas at ITV’s new Coronation Street production facility at MediaCityUK.

“This work is necessary due to the original steel frame of the stage areas showing signs of slight movement beyond acceptable construction tolerances. Mace confirm that the site is safe and that works to the main support building, the lot and all other areas of the site are continuing.”

“Construction of the main building and the Coronation Street lot, continues uninterrupted, as does production of the show at the current Quay Street site and we remain on track to begin ITV’s move to the new MediaCityUK base in the autumn.”

Mace would not comment on the length of the delay to the project or the cost of the rebuild.