Mace has won the deal to refurbish the former offices of Bloomberg on Finsbury Square in the City of London.

The firm is understood to have beaten ISG to the job at City Gate House which was designed in 1930 by Frederick Gould and Battersea power station architect Giles Gilbert Scott and originally built as a club for BP.

The scheme, which has been renamed the Gilbert, is being developed by Brookfield and is understood to have a pricetag of around £60m.

Mace, which recently completed work on Microsoft’s flagship store on Oxford Street that opened its doors to the public last Thursday, has signed a pre-construction services agreement for the job which has been designed by architect Stiff + Trevillion.

The nine-storey City Gate House sits within the Bunhill Fields and Finsbury Square conservation areas and is linked to 50 Finsbury next door, which was also occupied by Bloomberg and completed by Foster + Partners in 2000. This link will be removed as part of the strip out process.

As well as extra office space, the job will involve adding more cycle spaces and shower facilities as well as trimming down the amount of space taken up by plant.

The last of Bloomberg’s staff moved out of City Gate House last year into their Foster + Partners-designed new home near Cannon Street station. 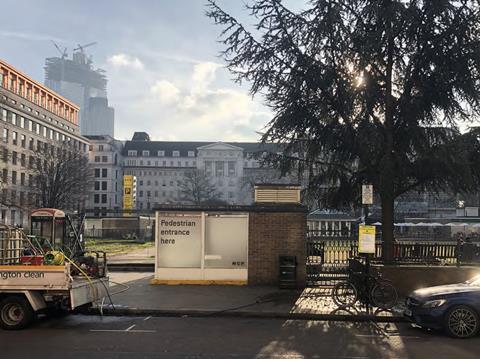