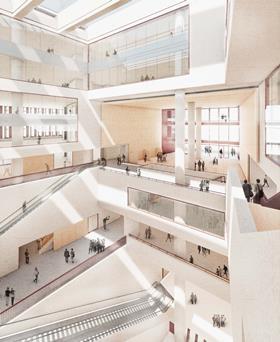 Mace has pipped Laing O’Rourke to land work on the first building at UCL’s new Stratford campus in east London.

The contractor has been appointed to a pre-construction agreement to deliver the £200m Marshgate I (pictured) project.

The 35,000m2 research, innovation and teaching building has been designed by Stanton Williams, a former Stirling Prize winner.

Construction is expected to start by next summer.

Earlier this month, Building revealed Mace and Laing O’Rourke were the final two firms left in the running for the job, beating out three other big name firms along the way. Lendlease, Sir Robert McAlpine and Bouygues were originally also shortlisted for the job.

UCL has also begun the search for a contractor for the first phase’s second building, Pool Street West, with shortlisted bidders expected to be notified imminently.

The £90m Lifschutz Davidson Sandilands-project will provide a mix of student accommodation and academic space.

UCL East, which is being built close to Zaha Hadid’s aquatics centre, is part of the wider Stratford regeneration and neighbours the East Bank cultural and arts project, which has previously been known as Stratford Waterfront and Olympicopolis.

The project, which is being built for Sadler’s Wells theatre, the London College of Fashion, the BBC and the V&A museum, is being designed by Allies & Morrison, O’Donnell & Tuomey and Arquitecturia.

Mace is set to project manage the construction of the arts and culture precinct.

And Mace is also favourite for a high-profile scheme to turn part of the former athletes’ village for the 2012 Olympic Games in east London into more than 500 build-to-rent homes. The job for developer Get Living has a value close to £200m.