Projects including HS2 and the Dogger Bank offshore wind farm could be hit by a “mammoth” admin burden because of proposed tax changes likely to be introduced next year.

Last week, HMRC announced changes to the aggregate levy, which taxes the use of pits containing materials such as gravel, sand and rock for construction schemes. 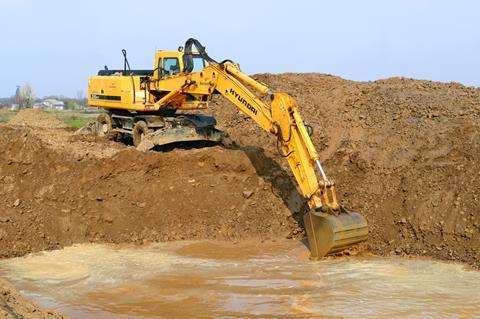 Known as borrow pits, they are widely used on large infrastructure projects including rail, road and energy schemes for temporary works like building haulage roads.

Ministers have proposed removing an exemption to the tax which applies when the pits are located within the same site as the project.

As the levy on aggregates is currently £2 per tonne, the change is unlikely to lead to a significantly increased tax burden.

But a tax expert from PricewaterhouseCoopers (PwC) said that projects would be forced into protracted compliance negotiations with HMRC which could drag on for years.

Currently, aggregates dug up from borrow pits, which are not mixed with other materials and are then used on a project located within the same site, are not taxed.

Under the new rules, projects would need to install a weigh bridge at every gravel pit to weigh trucks as they enter and exit so HMRC knows how much material has been removed and can calculate the amount of tax.

But PwC environmental tax leader Jayne Harrold warned that this would rarely be done in practice because it would be impractical.

She said: “Transmission lines cover hundreds of miles, with maybe 20 gravel pits across the project. You’re not going to install a weigh bridge at every little gravel pit that you’re borrowing a few thousand tonnes of gravel out of.”

Instead, projects would need to agree a ‘special method’ with HMRC for determining how much material has been removed.

It would involve testing of the aggregate to check its density, surveys of the site, counting the number of trucks that are used and calculating their average weight.

Harrold said HMRC would also need to monitor the agreement to make sure the right volumes of material are being declared.

She added: “They are going to scrutinise the records and returns that are being made to them, so there will be enquiries, they’ll be drilling into data, they’ll be asking questions, there might be differences of opinion about whether you have done the right thing or not.”

And because any such arrangement would be an exception to the rules, it would need to be applied for in writing for each individual infrastructure site.

Harrold said: “While there’s not a huge amount of cost, there’s going to be a mammoth admin burden just in terms of documenting and proving how much stuff came out of the pits.”

Borrow pits are often used by major projects for planning reasons, to prevent local residents from objecting to the use of large trucks on roads.

While a quarry could be used to source aggregates instead, this would result in planning difficulties, increased transport costs and a greater amount of carbon being emitted.

Harrold said the new laws are likely to be introduced as part of the next Finance Bill in March 2022.

The reforms also include a simplification of the aggregates levy to replace multiple exemptions with a single exemption for unavoidable construction by=products, which Harrold said would “hopefully ease administration and interpretation and result in fewer disputes with taxpayers”.

The levy has led to several major rows ending up in the courts. In 2013, Northumbrian Water won a case against HMRC, which had wanted to tax aggregates taken from a borrow pit being used for a resevoir project. The inspector had argued that the pit, which was located at the end of a fenced-off road leading from the main site, was in a different site.