Make has submitted plans for the next phase of the Arena Central scheme being planned for the middle of Birmingham.

The architect behind the city’s Cube building has already been given detailed planning for the first commercial building in the £400m Arena Central development.

One Arena Central will be built opposite Mecanoo’s Stirling Prize-shortlisted library. It will contain 13,000sq m of office accommodation plus retail across eight floors. 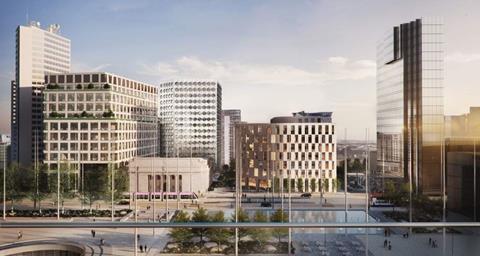 The scheme is being built in the heart of Birmingham

The latest scheme, called 3 Arena Central, will be built next door and will see 21,500sq m of commercial space go up across 13 storeys. Developer Arena Central Developments, a joint venture between Miller Developments and Pro Vinci Asset Management, said the building could be built by spring 2019.

The Arena Central scheme is in competition Argent’s Glenn Howells-masterplanned nearby 170,000sq m Paradise Circus mixed-use scheme with the first phase being built by Carillion.

A number of empty buildings including the former Carlton TV studios are being demolished to make way for Arena Central. The site is also home to the recently listed Alpha Tower by 1960s architect Richard Seifert.