Scheme in City of London will run to 27 storeys

Cube bidders Multiplex and Sir Robert McAlpine are two of the three firms in the race for Make Architects’ 20 Ropemaker Street in the City of London, Building understands.

The pair have been joined on the shortlist by Skanska for the 27-storey scheme which was given planning nearly a year ago. The scheme is understood to have a construction cost north of £150m.

The building’s reception, which doubles as a bar, will be built opposite the entrance to Moorgate station with planned retail units set to be built on Finsbury Pavement.

Developer on the scheme is Old Park Lane Management and CORE. It will include around 415,000 sq ft of office space.

The stepped tower will feature five roof terraces and be 128m tall at its highest point.

Multiplex and McAlpine – along with third bidder Mace – will find out by the end of the year who has won the £350m deal to build the Cube, which has been designed by Renzo Piano and will be built in Paddington.

The enabling, sub and superstructure package is being let by developer Sellar separately with Keltbray, Getjar and J Coffey all competing for the deal which has a pricetag of between £40m and £50m.

A fourth team, comprising Erith, which is already on site carrying out demolition work, Byrne and Laing O’Rourke-owned Expanded is also on the shortlist. A winner will be named in January. 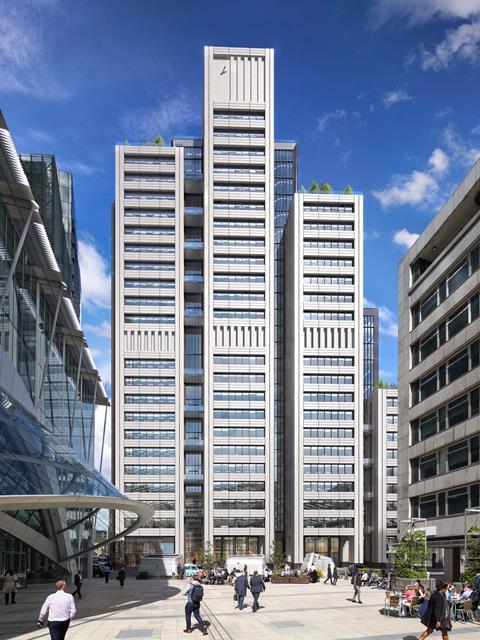 How 20 Ropemaker will look when completed