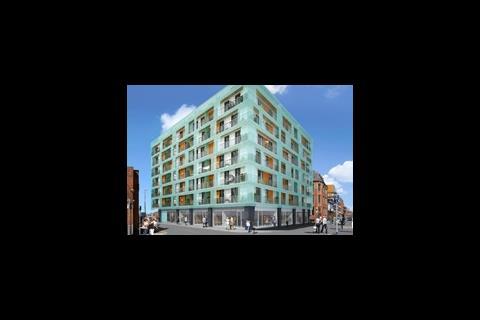 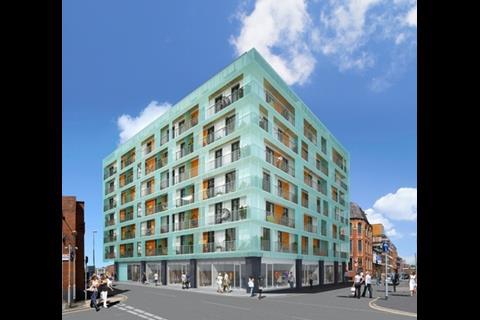 The 61 flats in its city-centre Xantium building, built for Moylan Homes, will achieve the highest level of the Code for Sustainable Homes, level six, which all new homes built in England will have to meet by 2016.

Large windows will maximise natural lighting in the apartments, with the punched-copper screens that give the building a distinctive translucent green hue providing privacy and solar shading.

Built on the site of a surface car park facing onto Cable Street, Addington Street and Mason Street, the eight-storey building will also include four commercial units at street level, constructed to meet the BREEAM Excellent environmental rating.

All the residents' heat and electricity needs will be met from on-site generation, including photovoltaic cells as well as biofuel and biomass generators. Rainwater and grey water will be captured and recycled to cut water consumption, helped by reduced-flow sanitary fittings.

The building will also feature a green roof with English native wildflowers and grasses, including an area specifically designed to encourage protected black redstart birds.

Dragana Opacic, director of Makin Architecture, said: “In achieving code six for this type of development, eight years ahead of the government's target, we are actively demonstrating that it is possible to build carbon-neutral buildings today.

“It is true, however, that compared to a standard development, in terms of capital it is far more expensive. Nevertheless, this type of project should be viewed as true investment in our future.”

Structural engineer on the scheme is Kingfisher Consulting and M&E consultant was NDY.