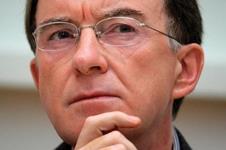 Business secretary Peter Mandelson has called for "more engineers, not financial engineering" in a keynote speech to the Labour conference in Brighton.

Mandelson said the government would help innovative businesses invest in research and development, and admitted the government had in the past been guilty of failing to promote industries other than financial services hard enough.

He said: "We're going to do more to put finance at the service of industry by building up new public channels to deliver private funds to innovative and fast-growing companies. Less financial engineering, and a lot more real engineering."

He also said that the market alone could not always make the changes necessary to create a resilient and enterprising modern manufacturing sector, and that government help would be available to firms, including those in the wind power sector, with viable and important plans that wouldn't get off the ground without extra funding.

He said a re-elected Labour government would turn the UK into a "modern manufacturing nation", and that the government was asking regional development agencies to expand. The Conservative Party has said it would scrap RDAs.