Margins tick up at Barratt 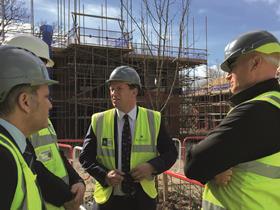 The country’s biggest housebuilder hiked margins up again as Barratt said revenue in the half year went through the £2bn barrier.

The firm said that the cost of building homes would go up by 4% during its full financial year but said it was keeping a lid on costs by rolling out new housing ranges as well as using modern methods of construction such as timber frames.

The company also said its current trading remained strong with total forward sales up 7.3% to just over £3bn at 3 February.