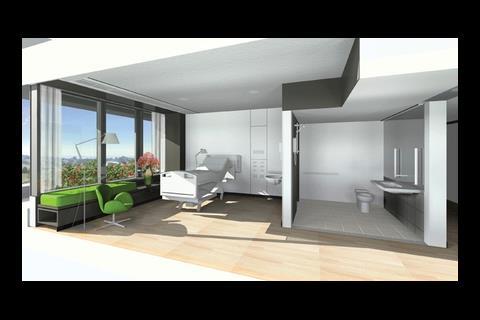 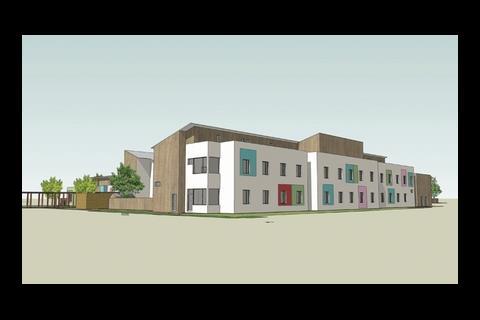 A £23m mental health unit designed by Devereux Architects or Kier Eastern in Suffolk. This was a Procure 21 job 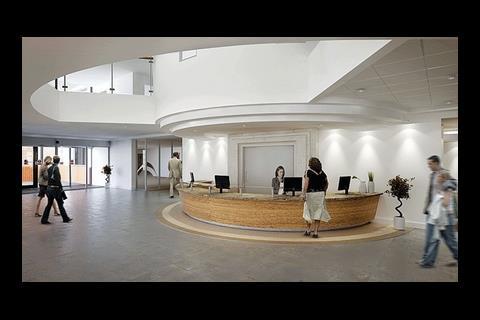 The Lytham Primary Care Centre near Blackpool, procured using the Official Journal and due to be finished next month 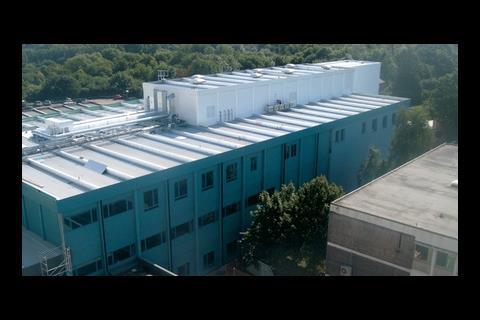 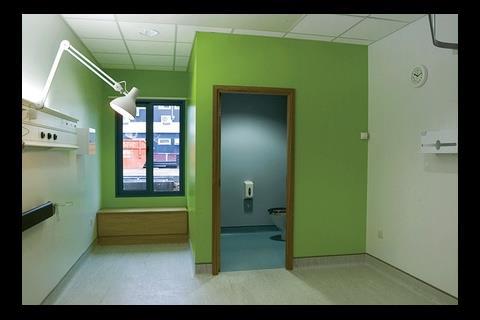 The £37m project copied a design from Europe

Having spent rather too long languishing on its sickbed of late, the government’s healthcare programme looks finally to have a spring in its step. So now is the time to pounce on the opportunities it offers

Over the past year, the industry could have been forgiven for thinking that the government had hung a “do not resuscitate” sign above its moribund healthcare programme.

About £2.4bn worth of PFI projects issued over the past two years are on hold, and flagship schemes such as the £711m University Hospitals of Leicester PFI were shelved as early as June 2007, before the credit crunch. The Procure 21 framework, which is used for smaller primary care hospitals, has pretty much ground to a halt, and the sector was noticeably absent from those targeted for accelerated spending in the chancellor’s pre-Budget report.

But we may be turning a corner. Some large PFI hospitals may now go ahead under the government’s plan to help fund up to £13bn of PFI projects, with Bristol’s Southmead hospital one of the schemes that may be in line for cash. More tellingly, there are renewed signs that healthcare initiatives in the public and private sectors could provide a tonic for ailing firms during the downturn.

Here we examine how to benefit from recent and forthcoming frameworks, and look at some of the healthcare work on offer through other routes.

What work is available?

These types of projects are flourishing as councils become more confident and ambitious in their procurement.

There are a number of hopeful signs. First, the projects are becoming larger. Michael Shillingford, healthcare director at MedicX Group, says five years ago the average new-build GP surgery was 800m2 and cost between £600,000 and £1m. Now it is 2,500-3,000m2 and costs between £5m and £10m.

Second, there is a lot of work to be done. Statistics compiled by the Royal College of General Practitioners show that 49% of GPs’ surgeries need to be refurbished or replaced. Finally, the NHS is planning to change the way it delivers primary healthcare. Shillingford says that within three years about a quarter of primary care will be offered by a pharmacist. Many schemes will also be located alongside other community facilities, such as other medical services in developments known as polyclinics or with schemes as diverse as swimming pools and education facilities. All this adds up to a steady, long-term flow of work.

The NHS’ favoured means of delivering these smaller local schemes until now has been the LIFT programme. LIFT (which stands for local improvement finance trust) was introduced by the Department of Health (DoH) in 2000. The aim was to use a public–private finance model and tie schemes into wider regeneration work in the areas. The programme was worth £1bn, and was used by about 80 primary care trusts.

The DoH is in the process of introducing a successor to this procurement method, Express LIFT. The intention is to keep the framework, but to make the process easier to negotiate and available to all primary care trusts. There is also a drive to use the framework to procure services outside the healthcare sector. Contractors have already been appointed to the framework, but it is expected that many clients will go outside it to procure (see below).

How to win the work

Seven consortiums were appointed to the Express LIFT framework earlier this month. Firms on it include contractors Morgan Sindall and Eric Wright, consultants Cyril Sweett and Babcock & Brown, facilities manager GSL and investors Anagennao and Sutton Harbour. These consortiums have chosen their supply chains, but the clients will appoint consultants and architects.

The original LIFT model required three bidders to work up sample schemes, which could take up to two years. Now, framework members will undergo a “beauty parade” and be appointed six to eight weeks later. The trust and the preferred partner will then set up a LIFTCo to build and operate schemes over a 20-year period.

Chris Whitehouse, chairman of LIFT Liaison Organisation for Business Investors, says the success of the original scheme will lead increasing numbers of PCTs to sign up. Others are more sceptical. A trust has to find 40% of the money to built a facility and then pays rent for 25 years, which means that the lifecycle cost can be high.

Consequently, many primary care trusts still use traditional tendering through the Official Journal. There is also a growing tendency to use independent NHS foundation trust frameworks, which are procured on a local basis and can favour SMEs. Increasing numbers of NHS trusts are seeking foundation status, which gives them greater freedom to chose their own procurement methods; there are now 115 foundation trusts compared with 25 four years ago.

What work is available?

From September next year, a framework called Procure 21+ will be introduced to build publicly funded NHS schemes, mainly hospitals and mental health units. It will replace Procure 21, the £2.4bn programme launched in September 2003, and will be worth about £2.9bn.

The current framework, which has been running since September 2003, has eight principal supply chain partners and uses the NEC2 contract form. It has acquired a bad reputation in the industry, largely because some firms that won places on the framework did not go on to win much actual work; in 2006, a row broke out between the government and contractors after several refused to pay the annual fee of £170,000.

Despite this, 219 schemes worth more than £1m have been completed, as have 36 projects worth less than £1m. Fifty-seven schemes are still on site.

The largest scheme produced under the framework was a hospital development costing £72m, but the Department of Health hopes Procure 21+ will exceed this.

How to win work

The Procure 21+ framework, unlike LIFT, will be entirely publicly funded. Despite the industry’s mixed feelings about the original framework, the likelihood is that economic conditions will prompt fierce competition to win a place on its successor.

Firms hoping to get involved should note the following dates in their diaries:

Some firms on the Procure 21 framework, including Balfour Beatty, and Laing O’Rourke, are expected to reapply for the new one. Mark Carter, senior project director at healthcare specialist Devereux Architects, says everyone stands a chance of getting a place because the government has promised to consider all firms, regardless of size. “As long as you can meet the prequalification requirements, you have a shot,” he says.

On the face of it, this looks like a dubious claim, given that one of the conditions for framework membership is that firms must have an integrated supply chain that allows them to offer nationwide coverage. However, smaller firms can overcome this by joining up with regional contractors. For example, Midas Construction, Geoffrey Osborne and Simons Construction teamed up to form Medicinq, which then won a place on the Procure 21 framework.

Meanwhile, there are significant opportunities in specialist areas, such as mental health, for firms with the right experience – although the growing number of non-experts trying to gain work in the sector does concern clients.

Carter says Devereux Architects is capitalising on demand for its knowledge in the field. He says: “It’s crucial firms are aware of, for example, anti-ligature design – there should be no design elements that patients could use to harm themselves, such as tiling on the walls.”

Private construction output in the health sector grew 54% to about £3bn in 2008, according to a report by analyst MBD. Overall, the sector’s value is believed to have increased by 119% between 2004 and 2008.

Contractors in this sector have, like those in all private sectors, been hit by the availability of finance during the recession, but the main providers are still continuing with programmes. The fastest growing client in the private sector is Circle, which has planning permission for nine sites around the country. It is planning 25 hospitals and 50 health clinics within the next five years, Some of its rivals are Community Solutions, Ashley House and MTX.

How to win the work

Circle always uses the same two or three firms for each element of the contract, from architects to contractors and M&E specialists. However, it has not ruled out adding to its suppliers in the future.

Community Solutions (which is on the Express LIFT framework and has six LIFT projects) uses traditional tendering for projects that do not fall under LIFT. The group has an agreement with Morgan Ashurst, the construction services subsidiary of Morgan Sindall, for the LIFT projects, but said there would be others coming up in 2009 that they will tender in the traditional manner.

Ashley House has seven LIFT schemes, but uses traditional tendering for non-LIFT ones. It has a series of projects coming up in 2009 that people will be bidding for.

The physical face of healthcare is changing, as demonstrated by West Hertfordshire NHS Trust, which in February opened the largest modular healthcare building in Europe at Watford General Hospital.

Designed by Murphy Phillips, and developed by Medicinq Osborne, the £37m project used Procure 21, and copied a modular design from Holland. The building was put together by Yorkon, Shepherd Construction’s off-site arm.

The structure, a 120-bed acute admissions unit, was built and semi-furnished in York, before being transported to site. It took 10 months to manufacture and three weeks to assemble.

Paul Maitland, director of Turner & Townsend, believes the use of modular techniques for healthcare is a trend that is growing because of the speed at which a structure can be put together. He said up to six months was saved on the project compared with traditional methods. He says: “The challenge is to make sure people are all agreed on the clinical layout sooner than they would do usually.”