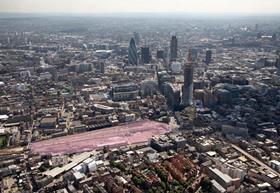 Developer Hammerson has said it will submit plans for its Bishopsgate Goodsyard development in Shoreditch, London, in spring this year.

The 4.3ha site is being developed in joint venture with developer Ballymore Properties and is expected to deliver 260,000m2 of mixed-use space.

The development will also contain a new park.

Work on site is not expected to start until 2016.

The firm announced the plans to submit for planning application for Goodsyard in its annual results, where it reported pre-tax profit, including valuation changes, of £341.2m in the year to 31 December 2013, up from £142.2m the year before.