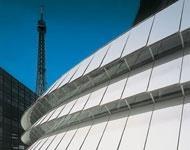 Saint-Gobain, the French materials giant, has been fined €896m (£738m) for acting in a cartel to illegally fix the price of glass used in automobiles.

The fine, announced today by the European Commission, is the largest ever levied on a single company for cartel offences.

Although the offences do not relate to the construction industry, Saint-Gobain is a leading supplier to the sector of renewables such as rainwater harvesting materials and solar panels.

The British company Pilkington was also fined €370m (£307m) for its role in the cartel, which fixed prices in glass used in the automotive industry.

Saint-Gobain’s fine was increased by 60% as it has a history of anti-competitive behaviour. The €896m sum represents 95% of the annual sales of its automotive glass in Europe, and several decades worth of net income.

Saint-Gobain said the fine was “excessive and disproportionate” and added that it intends to appeal.