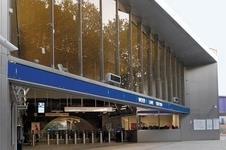 Wood Lane station is among £200m of transport improvements around £1.7bn shopping centre

Mayor of London Boris Johnson unveiled £200m worth of transport infrastructure at the opening today of the £1.7bn Westfield shopping centre in Shepherd's Bush.

Johnson said: “This huge investment in infrastructure will help to boost the London economy and will make life better for the people of west London, who will see the real benefits of an unprecedented improvement in public transport.”

The transport improvements were funded by the London Borough of Hammersmith and Fulham, which invested £170m, and Transport for London, which provided £30m.

London Underground's O'Toole said: “The completion of these world-class transport links in the borough makes it one of the best connected in London, which is great news for local people and businesses.”