McAleer & Rushe to build £100m Glasgow office for US bank 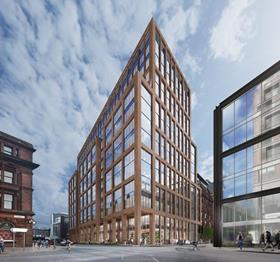 McAleer & Rushe has been lined up for a £100m scheme to build a new office block in Glasgow that will eventually be occupied by JP Morgan.

Building understands that developer Osborne + Co sold the Argyle Street site to the US investment bank earlier this month for an undisclosed sum.

Osborne + Co is remaining as developer on the scheme, which has been drawn up by local practice Cooper Cromar and is the largest office project to be developed in the Scottish city in a decade.

The 13-storey block (pictured) will become JP Morgan’s European technology centre which has room for up to 3,000 staff across the 270,000ft2 of office space planned.

JP Morgan already has two sites in the city, where it employs around 2,000 people who will eventually move into the new building once it is finished in March 2022.

The site, which is in the shadow of Glasgow’s Argyle Street station, has been derelict for more than 20 years.

Bathgate demolition contractor Dem-Master is set to begin work next month tearing down the existing site which is currently made up of a mixture of B, C and unlisted buildings. Demolition is due to finish next January.

The city council gave the scheme planning earlier this month after the buildings were deemed beyond repair by Historic Environment Scotland.