McAlpine and O’Rourke eye arena next to Manchester City stadium

Venue will be built at Etihad campus

Sir Robert McAlpine and Laing O’Rourke are both eying the chance to build a new 20,000-plus capacity arena in the shadow of Manchester City’s Etihad stadium.

The pair are understood to have been joined by Bam in looking at the job and one source said: “One of us will be successful in that. Everyone is going very hard for that one.”

Los Angeles-based developer Oak View Group launched a consultatation on the £300m plans last week with a second round due to take place before Christmas.

The proposed site is a derelict plot, owned by City Football Group, the holding company of Manchester City, on the approach to the Etihad stadium, originally built by John Laing. 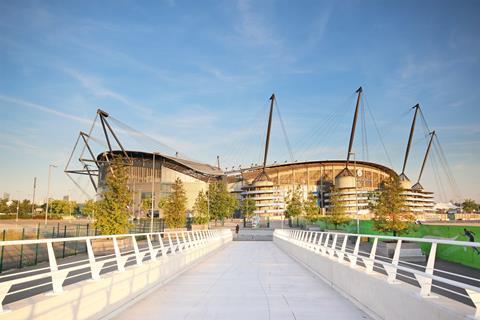 The arena would be a focal point of the Etihad campus and be a rival to the 21,000 capacity Manchester Arena in the city centre which celebrates its 25th anniversary next July.

Oak View has asked Populous to come up with proposals for the venue which is part of a wider masterplan called Eastlands which was updated this spring and proposes a sports tech hub for the area as well as being a retail and leisure destination.

In the consultation published in March, the masterplan refers to proposals for “a new large indoor arena with a capacity in excess of 20,000 spectators”.

The Manchester scheme would be Oak View’s first in the UK with most of its sites in the US.

Meanwhile, 30 miles west along the M62, McAlpine and O’Rourke are also understood to be looking at the next stage of the redevelopment of Liverpool’s Anfield stadium.

Recent schemes have been carried out by bust firm Carillion and its £75m job to expand the main stand opened in 2016 bringing capacity to just over 54,000.

Liverpool is now looking at increasing capacity of the Anfield Road end – the stand opposite the Kop.

Outline planning for an existing expansion scheme, which involved adding 4,000 seats at the Anfield Road end, expired last month with the club instead set to submit a new application to increase capacity in excess of 60,000.