McAlpine set to be City slicker

Sir Robert McAlpine is emerging as favourite to build the 21 Moorfields office block in the City of London.

The Bloomberg building builder is understood to have edged out remaining rival Skanska for the job which has been designed by Wilkinson Eyre. Earlier pitches from Multiplex and Mace were dropped from the race.

Mace had been carrying out early works on the development which sits above the Moorgate Crossrail station.

One source looking at the deal said: “A lot of the preparatory work has been done there so I’m not sure what’s left.”

The building will be the new London home of Deutsche Bank which has taken 469,000 sq ft of space at the Landsec development which will be split across two buildings with the tallest rising up to 16 storeys.

It was approved by City of London planners back in February and had to be redrawn after the German finance firm, which has taken the majority of the building on a pre-let, asked that more space was created to accommodate its trading floors.

McAlpine was pitching for another Wilkinson Eyre scheme – the steel-framed 6-8 Bishopsgate tower which is set to be built by Lendlease. The architect, which beat Snohetta and Bennetts Associates to the job, has designed a 50-storey tower that is being developed by Japanese firm Mitsubishi Estate with Stanhope as development manager. 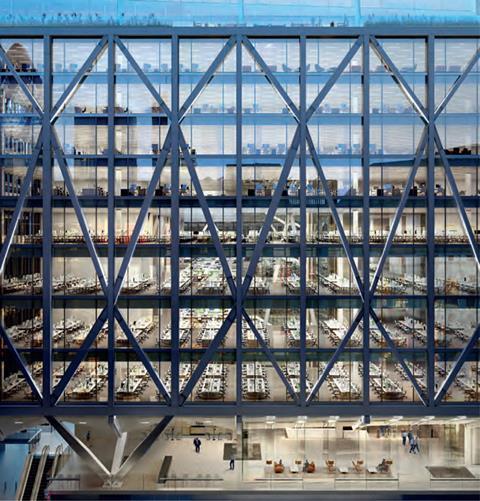