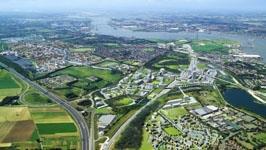 The man in charge of Land Securities' £3bn scheme to build on land around Ebbsfleet station in Kent has left after the project fell victim to the recession.

Steve McGuckin was head of the developer's Ebbsfleet Valley regeneration project, which includes building 10,000 homes and 645,000m2 of office space on 420ha of land close to the Eurostar train station.

A Land Securities spokesman said the Ebbsfleet project was now being handled by its London portfolio head of development, Colette O'Shea, with the whole team being brought back into its London operations.

The spokesman added: “Ebbsfleet has been scaled back because of the downturn. This is a 20- to 25-year project and we have to flex it accordingly to meet the market at the time.”

The former Mace director of consulting has gone after nearly eight years at the group, which included a stint as development director where he was in charge of handing out millions of pounds worth of work to contractors.

McGuckin was in charge of this division when he secured planning permission on One New Change, an office scheme next to St Paul's Cathedral in the City of London, which has been drawn up by French architect Jean Nouvel and which is being built by Bovis Lend Lease.